The History of Strawberry Shortcake 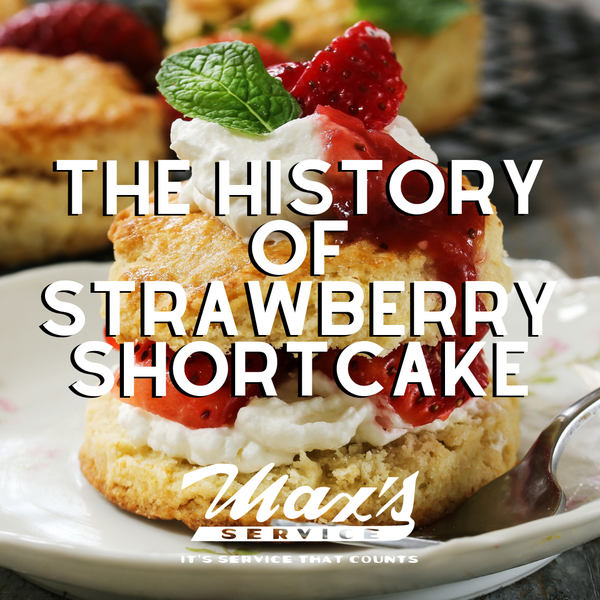 Spring is a fleeting thing in northern Michigan. After a cold and rainy April and a less-than-temperate start to May, we’re getting our first glimpses of summer. That means it’s also time to enjoy in-season fruits! In short, let’s make strawberry shortcake!

Michigan is a perfect place for fresh, local produce, and we are getting close to the sweetest time of the year. Over the next two months, blackberries, cherries, blueberries, and strawberries will all start to make it from the fields to your local farmer’s market or roadside stand. For those with a sweet tooth, we’re spoiled for choice when it comes to recipes that call for fruits like these, but few as simple and satisfying as strawberry shortcake.

There are a number of variations on this timeless classic, but the core recipe remains largely unchanged since the earliest documented versions. The dessert doesn’t date back quite as far as we’d expected, but it’s still been around a while. Shortcake has been in English cookbooks since it first appeared in 1588; for context, that’s the same year that the Spanish Armanda foundered off the shores of Elizabethan England. Perhaps Queen Elizabeth celebrated with some strawberry shortcake?

Shortcake is simply sweetened bread that relies on baking soda or baking powder for leavening instead of yeast. Some folks include eggs, but most of its ingredients are flour, sugar, baking powder, salt, and water; a little cinnamon or vanilla doesn’t go amiss, either. It’s then baked at a relatively high temperature until it sets, essentially removing much of the moisture and leaving a somewhat firm, crispy exterior crust and a dense core.

In the US, shortcake became the traditional way to celebrate spring and summer fruit harvests, most often paired with delicious locally-grown strawberries. Of course, just strawberries weren’t quite sweet enough for Americans, who added butter and sweet cream. By the early 1900s, French pastry chefs had replaced heavy cream with whipped cream, and the craze carried across the Atlantic, a trend that remains in place today.

Michigan’s strawberries are a hearty, reliable harvest and fare well even in our turbulent climate. Most growers harvest strawberries by the first week of June, though it can take another week or two before you’ll find them in some grocery stores. Farmer’s markets often see the first pints of the season, where locals can meet and support farmers directly. We’ve been known to make a quick, early dash from the backdoor of our store for a glimpse of the bay and a stop by the Sara Hardy’s Farmer’s Market every Saturday all summer!

You can bring the magic home and whip up something special for the family this weekend! Check out this easy, wholesome Strawberry Shortcake recipe, and make sure you hunt down some local strawberries to celebrate the bounty of northern Michigan!